Happy Holidays from the EDAWN Team! On behalf of the EDAWN Board of Trustees and staff, we wish you the very best this holiday season. We are excited about the progress we’ve made over the past year: more than 2,100 new quality jobs; the attraction of 15 new corporate headquarters; with a 38% increase in the average wage of assisted companies over the past two years. With a full pipeline and some significant announcements planned, 2019 looks like it is setting up to be another great year!
**EDAWN’s new address** as of December 19, 2018: 401 Ryland Street, Ste. 101, Reno, NV 89502
The need for affordable Housing:  It is interesting to see that we are not the only community dealing with a critical shortage of affordable/workforce housing.  Here is an article that talks to the need for those most impacted by the shortage of affordable housing options to be heard, because those opposed and most vocal are not normally the ones desperate for a place to live.  “Often the only voices we would hear would be neighbors who were opposed,” said Chiu, who called on yimby support to get affordable housing measures through the legislature this year. Go here for the Guardian article.
New Report on the current impacts of the Tesla Gigafactory just released by the Governor’s Office of Economic Development (GOED).  In short, Tesla has exceeded its commitments, to the State of Nevada, in the areas of capital investment and job creation. As of June 2018, Tesla has hired 7,059 employees to its original projection of 6,500. Capital Investment stands at $6 billion to its original projection of $4.95 billion. Average wages for the 7,059 employees are at $25.78 per hour, well above the statewide average wage of $22.54 per hour, with a 93 percent in-state residency rate for qualified employees.  Additionally, more than 17,000 construction jobs were created between 2015 and 2017. Here is the report.
Tesla in Nevada – November Spotlight – Here is the story.

Congratulations to Reno-Sparks for job growth: Number 12 on the USA Today list of the 31 cities adding the most jobs as the US economy grows, November 12, 2018.  – 5 yr. employment increase: 18.0 percent (+36,792 jobs) – August unemployment: 3.7 percent and – Median household income: $61,360. Every industry added jobs with the strongest growth in the trades, transportation, and manufacturing. Because of the rapid job growth, Reno’s unemployment rate improved more than nearly every other U.S. metro area in the past five years. Here is the article.

The EPIC Report with actual numbers updated. RCG Economics has updated the chart using the most recent census numbers with seasonal adjustments.  You can see we are exceeding what many thought was an unrealistic projection of 50,000 new jobs in 5 years and have nearly hit that number in just four years.  A new 5 year projection will be announced at the February 7th EDAWN’s State of the Economy.
Actual numbers graphs. 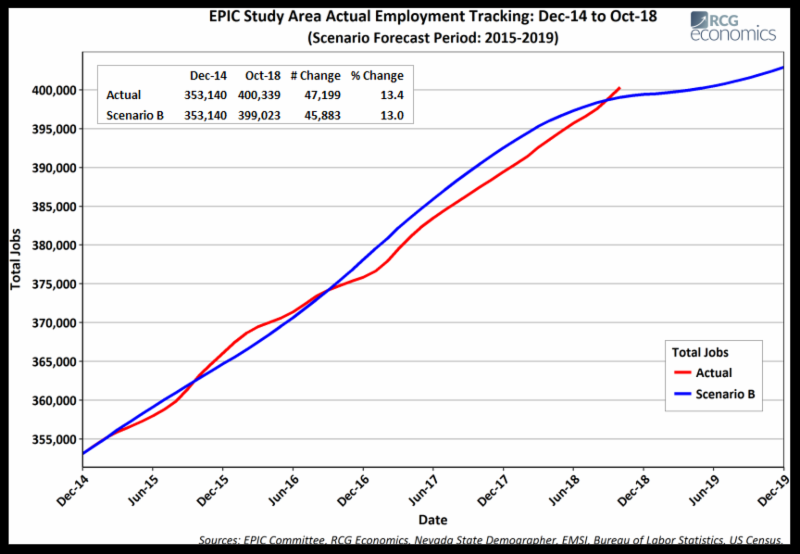 Housing remains a serious concern:  The chart below shows that we are well off the goal for the number of permits for new housing units (including apartments and condos). As of October we are more than 1,800 permits short of where we should be for this year.  The shortage of new housing continues to drive our housing prices up. 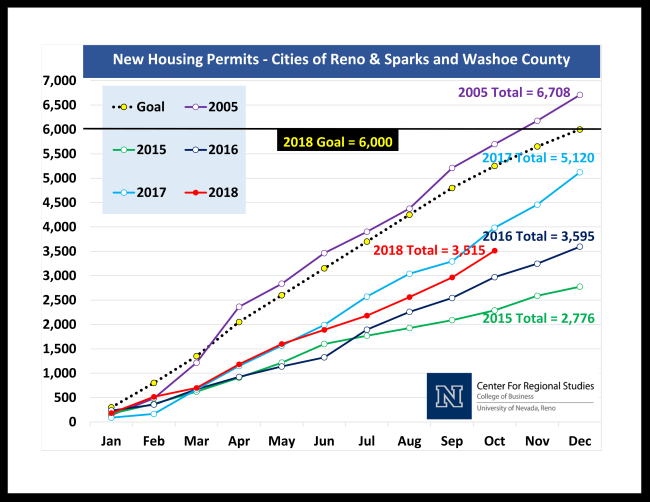 Here is the latest RGJ article:
The Recession is Coming; the Recession is Coming!  – The stock market is now off its highs by more than 5%, down 1,000 points and lower than where we started the year. With rising interest rates and a softening housing market, I am often asked about the “looming” recession. After all, it has been almost ten years since the Great Recession, which ended in 2009, and we have never gone longer than ten years without a recession. So, we are overdue. Fortunately, this eventual recession will not impact our region like recessions have in the past, and a little slowdown may be a good thing for us, as we digest our considerable economic success from the past several years.  Here is the full article.
EDAWN articles, published in the RGJ, are stored on our website. Here is the link to the library.

The Business Development team hosted 5 site visits in November and anticipates a busy few weeks meeting with new clients to close out the year.

At a recent Press Conference, EDAWN announced that rfxcel, the most tenured provider of track and trace solutions in the market, relocated its corporate headquarters to Reno. The new office is expected to open its doors this month. The office will serve as rfxcel’s main headquarters, as well as its research and development and back-office operations center. The company plans to hire up to 200 employees over the next several years.
You’re invited to a Company Announcement Press Conference on Dec. 17th. Check your email in the next few days for more detail.
Stay-tuned for more exciting company announcements to kick-off 2019.
To contact the Business Development team, please email EVP, Stan Thomas, VP, Chris Ault, Jr.or Program Manager, Norma Yamaji.

Nevada Promise Scholarship Mentors Needed! – Truckee Meadows Community College is seeking 150 volunteers from all different backgrounds to become Nevada Promise Mentors. As a mentor your main role is to support and guide students through their college journey. To find out more information about becoming a mentor, please click HERE.

The Stat Pack is a monthly business e-report, co-authored by Mike PeQueen of HighTower Las Vegas and John Restrepo of RCG Economics, with input from Brian Bonnefant of UNR. It combines important metrics relevant to business decision makers and financial commentary on current issues facing the Nevada economy. The Stat Pack features data and dialogue about the Southern and Northern Nevada economies.  Here is latest Fact Pack!

SAVE THE DATE!
“EDAWN’s State of the Economy – Economic Update Luncheon”
Thursday, February 7, 2019
Atlantis Casino Resort
11:30 am – 1:30 pm
Invitations will be emailed as the event nears